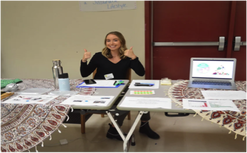 There were also youth leaders on a panel to inspire and educate students.  One of the speakers was Lauren Londono, an ex-SIAC Officer.  Lauren passionately presented the health, environmental and economic impacts of going vegan or vegetarian.

When asked about how her experience in SIAC made her an environmental advocate, she said, “SIAC really helped me get involved in the school at such a unique level. I had never been apart of a club or group that had such a unique relationship at an administrative level. So, this helped me further my passion for environmental protection. By being close with school administration and the school district, it allowed me to form connections that would, later on, help me make changes environmentally.”

During the networking session, the participants get to meet Jill Buck, CEO of Green Initiatives.  She engaged everyone and asked what they’ve learned from the workshop.  It was surprising to know that the creeks in Pleasanton are man-made and one can control the flow of water.  It was interesting to note that there are certain types of flowers that soak up water to prevent flooding.

Another compelling talk was from Dan Linehan as he presented about how a hummingbird, despite its size, does the best it could to save its habitat (a forest) from a fire.  The participants were inspired to be mindful of how to use the earth’s resources and take part in reducing wastes.

The YEAS summit exemplifies SIAC’s value system – when young people are fully engaged, they commit themselves to positive change.